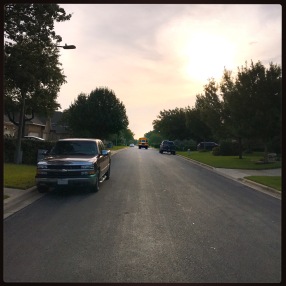 I just watched the school bus drive down the street with my kids inside. Just like that, the most profoundly moving summer of my life came to an end.

I’d planned on blogging about my adventures this summer along the way, but as the first stop morphed into the second and then the third, I found myself unable to process everything I was feeling in a translatable way. I’m a photographer. I’m a writer. Communicating is what I do.

But I just couldn’t. I had too many feels.

Now that I’ve had a few weeks to process the twenty-three day, 3,757 mile, 13-state journey in my mind and reflect on my photographs and my journal, I can finally share this life-changing adventure with my family, friends, and blog readers.

For people to understand this whole trip, I have to explain everything from the beginning.

In 2016, through ancestry.com, I was fortunate enough to have met Ann. We learned that our great great grandmothers were sisters, so we share 3x great grandparents. Through Ann, I met a few of her first cousins, and an online relationship began. As the months progressed, Ann and I became closer and closer, sharing a sense of humor that, thankfully, we both appreciated.

One day, months later, I logged into ancestry.com and found a brand new crop of twitching leaves. The more of them I clicked on, the more new images of relatives emerged. All I could think was, who the heck is this posting all these new pictures and where in the world are they coming from?

I messaged Ann, and she’d never seen any of these pictures and didn’t know the poster either. So I sent a message out into the interwebs, anxiously hoping to hear back quickly. Thankfully, I did. 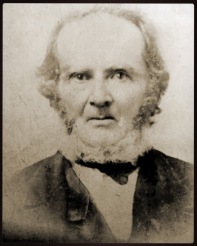 It turned out that Lynn, the mysterious poster of these images, was Ann’s and my cousin—our 3rd cousin 2x removed (we share a 4x great grandfather). Through a series of events, Lynn and her sister, Anne, had inherited a house in Pennsylvania. In the attic of this house were hundreds of family letters, photographs, albums, journals, and other stuff. It had fallen to Lynn and Anne to sort through it all and determine its fate.

Because Lynn and Anne are awesome, they set to the painstaking task of reading, identifying, sorting, and labeling everything. And as they laboriously began posting some of these treasures to ancestry.com, I serendipitously came across their trail of breadcrumbs. First Lynn and I started emailing, and then these emails grew to include more and more cousins.

Before long, there were six distant cousins strewn across the country shooting group emails back and forth. From New Mexico to Ohio to Texas to New York and other cousins cc’d here and there along the way.

It all became confusing.

At some point, Lynn suggested that we all get together, and offered to host a shindig at her home. We tossed the idea around for awhile and then started getting serious about the whole thing. We bandied about dates, and finally settled on mid-July. 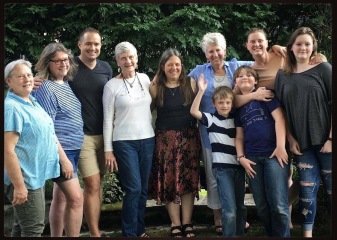 Keep in mind, we’d all never met before. It was ancestry.com that brought us all together. Now we really need to do the ancestry.com DNA test! (Pssssst! Hey ancestry…. Wanna sponsor this ragtag group of girls with some DNA tests? I bet we could even make ourselves available for one of your glamorous commercials too!)

And then my kids wafted. Since my husband couldn’t get that much time off work, they didn’t want to spend my daughter’s 13th birthday away from him and away from home. So we decided not to go. I was heartbroken. I really wanted to go. But then, after the first long and boring week of summer, reality set in and the kids decided that a road trip might be fun. 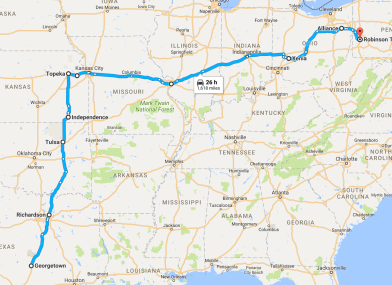 So I mapped the trip from central Texas to northeastern Ohio. And then I mused about what the trip would look like if we routed through Kansas, and then back through Kentucky. It was an ambitious plan, but I was up for it. 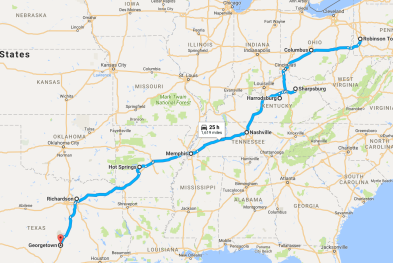 Through Find a Grave, I assembled what my husband called my “Fantasy League.” I created a virtual cemetery called “2017 Genealogy Geekout” in which I added every cemetery within the states along my proposed route. Then I checked to see how far out of the way each cemetery might be if we decided to visit it. Surprisingly, it turned out that every single one was no more than twenty miles off the proposed route. I didn’t really even have to divert very far off of any direct route.

I made my decision; this was happening.

I started plotting out my route with the only fixed dates being the dates of the Meetup (AKA: Genealogy Geekout) at Lynn’s. Everything else was negotiable. Two days before we left, I started making reservations. Topeka, Lawrence, St Louis, Dayton, Alliance, Pittsburgh… I called and messaged friends and asked if we could crash on couches and in guest rooms. I bit off the first 16 days in one evening, and then I was exhausted. I’d make the rest of the reservations from the road.

Before this trip, I’d never gone on a road trip with my three kids and without my husband or another adult. I’ve never taken on anything of this magnitude before. I wasn’t just stepping out of my comfort zone—I was shooting myself out of it like a human cannon ball. 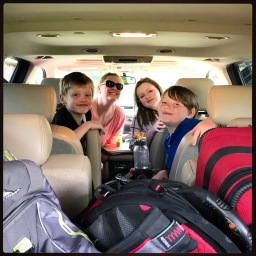 As we pulled out of the driveway that first day, I hit the trip-counter on the dashboard of my car and made a mental note to check it at the end of each day. I knew this adventure would be one that we would remember forever, but when it was all said and done, I never knew the depths to which this would truly reach. From unmarked graves to Revolutionary War Patriots with restored memorials, and with so many strangers who are now family by blood and by choice, we found our heartstrings pulled tight.

If my readers can walk away with just one thing, I hope it’s this: Go on a trip like this with your family. Find the places where your ancestors lived, where they worked, where they succeeded and failed, where they died, and where they were buried. Go to these places and just stand there. Breathe the air. Take it all in. Even if it’s a parking lot or an empty field or a 200 year old house or the nub of a headstone in a graveyard of unmarked graves. Just go. Stand there. Close your eyes and feel the weight of where you come from and who made you and who you are. 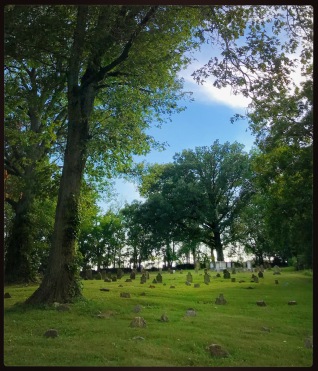 I’ve always loved the shows Who Do You Think You Are and Finding Your Roots, but I was always a bit puzzled when they’d cry while standing in an empty field, or why the shows would send them to another city to look up an article on newspapers.com and read it out loud. I totally get it now. And I barely even scratched the surface—I left so much undone because I didn’t have enough time and because the kids were with me, and… and… and… and…. I want to return to most of these places and do all this again for real next time. I need to. I need to scratch more than just the surface because in some of these places, we were only there for a matter of minutes before heading back out again.

So, now that I’ve laid the groundwork for the reason for the trip, I can start talking about our experiences on the trip and the people who made it just that much better.

I have so many stories to tell. So, now I begin the task of sharing my notebook of scribbles and my hundreds of photographs with everyone. I hope everyone else finds our experiences as amazing as we did.

© Julie Dirkes Phelps; Photographer, Author, Researcher, Archivist, designated “Keeper of Stuff,” and Storyteller. © Copyright 2017. All rights reserved. No part of this publication may be reproduced, distributed, or transmitted in any form or by any means, including photocopying, reposting, or other electronic or mechanical methods, without prior written permission. Be cool, don’t plagiarize. If you want to use something, just ask me. I try to make sure to attribute all images to the appropriate sources, but sometimes I get mixed up or inadvertently leave something out. Please contact me with any corrections or concerns. Thanks.

Images:
Feature Image: My filthy dashboard after a 23-day, 3757.1 mile road trip with three children; The school bus as it drove off and left me alone on the street after a summer of closeness; Silas Lee, the dude who made this entire summer possible since he is the closest common relative we all shared; All The Cousins in Ohio at the 2017 Geek Out; Screen Shots of the route I decided on before we left; The kids and me with all our stuff in Richardson, Texas on Day One of the Epic Roadtrip; The Cemetery in Harrodsburg Kentucky where three sets of my great grandparents are buried– all three great grandfathers (of varying degrees) are Revolutionary War Patriots.

8 thoughts on “Genealogy Geekout: The Summer of ’17”