February 15 is an important day in my family’s history.

It’s not an anniversary that we’ve ever celebrated, and in all honesty, this might be the first time anyone has ever brought this date to anyone’s attention. Regardless, it’s probably one of the most important dates on the calendar, and without the event that occurred nine decades ago today, I wouldn’t be here.

On this cold winter day in 1927, my father’s father boarded a ship in Bremerhaven, Germany bound for New York City. He was 19 years old.

Gerhard Dirkes was born on April 4, 1907, the first child of Regina Wessels and Gerhard Dirkes, a captain in the German Imperial Navy. They lived on a farm in Burlage, in the city of Leer in Ostfriesland in the German state of Lower Saxony. When Gerhard was about five years old, his sister, Regina was born. Early on during their childhood, Kaptain Dirkes was killed in WWI and their mother remarried. In 1925, the Ostfriesland Fire Insurance records show that Theodor Lueken, Regina’s second husband, assumed responsibility for the Dirkes farm.

By February of 1927, Gerhard and Regina’s mother had stepfather had a new toddler, and their mother was six months pregnant with another new half-sibling. Theodor made it clear that his 19 year old stepson was standing in the way of the new family and asked him to leave. With no job prospects for Gerhard in rural Ostfriesland, and his stepfather now in charge of what had once been his father’s farm, he decided to leave Burlage for America. Gerhard left 14 year old Regina behind, and promised her that she could join him once he was settled in New York.

With a self-purchased third-class (steerage) ticket and $25 in his pocket, Gerhard boarded the Munchen 3 and never looked back. The next time he returned to the country of his birth, it would be as a naturalized American citizen.

After eleven days at sea, Gerhard Dirkes disembarked in the Port of New York. He was documented as 5’8” with a fair complexion, blond hair, blue eyes, and no distinguishing markings. His aunt and uncle, Elizabeth and Georg Middendorf met him as he set foot on the docks in New York City, and he stayed with them until he was able to find a job. 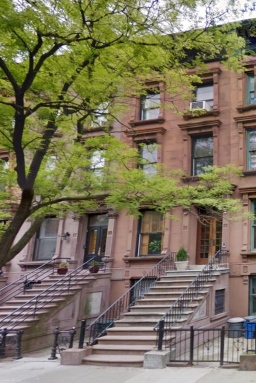 Within two years, Gerhard was living in a small, rented apartment in a three-story brownstone in Central Harlem and had found employment as a house painter. True to his word, once he was settled, he sent for his sister. In the summer of 1929, Regina Dirkes left the small, rural farm village of Burlage and joined her big brother in New York. She was 16 years old. Like her brother, Regina had in her possession a fully paid-for third-class (steerage) ticket and $25 in cash. But unlike Gerhard, Regina didn’t sail to America alone. Regina traveled with her 24-year old cousin, Margarete Dirkes. Both girls listed Gerhard as their closest relative in America, and stated that they would be joining him in Harlem.

By 1930, Gerhard was still living in the brownstone at 12 W 123rd Street in Harlem (image, left, from Google Earth). Regina had settled somewhere in New York City, and I’m not sure what happened to Margarete. Through a German social group, Gerhard had begun dating a beautiful Bavarian immigrant named Pauline, and was enjoying American life.

And the rest is a whole new story.

8 thoughts on “An Important Anniversary”