Psssssst….. I have a secret. Lean in closely so that no one else hears.

Yes. I’m tall. It might surprise you to find out that I am aware of this rather obvious fact of my anatomy, but I am. I’m actually pretty darn tall for a woman.

Throughout my entire life, I can’t even begin to put a number on how many people’s first words to me have been something to the effect of, “WOW! You’re really tall!” or said, “You’re so tall. Do you play basketball?” For the record, I am right around 6’1″. Ish. I think. Actually, I don’t know exactly how tall I am. I haven’t checked in awhile, but I say 6’1″ because it lets me weigh more and because no one ever questions it. And, let’s face it. It doesn’t really matter. Pants and sleeves are always too short and darts and waists are always in the wrong places for me anyway, so the difference between 6’½” or 6’1” or 6’2” doesn’t mean a hill of jelly beans.

But I’m going to let you in on another secret. Here goes…. My mom is tall too. Right around six feet.

And my grandfather? Yeah. Him too.

My great grandfather, William, had some pretty long stems himself. I recently read in the memoirs of Louis J Horowitz that “…like his brother, (William Dinwiddie) stood in his socks two inches taller than six feet, but he was strong as any man on the jobs he bossed.” And he was born in 1871. One hundred and two years before me.

My great grandfather’s enduring legacy is extreme height. Taller. Stronger, Better. Faster. More Efficient. He wasn’t a basketball player, and I bet you a nice, shiny nickel that no one ever asked him if he was. And, I’d also be willing to wager that same shiny new nickel that “Wow! You’re sure tall! Do you play basketball?” was never the first phrase out of anyone’s mouth when meeting him for the first time.

His presence commanded respect because the relationship between William Dinwiddie and height was known far and wide for another reason. My great grandfather was among the pioneers of the modern skyscr 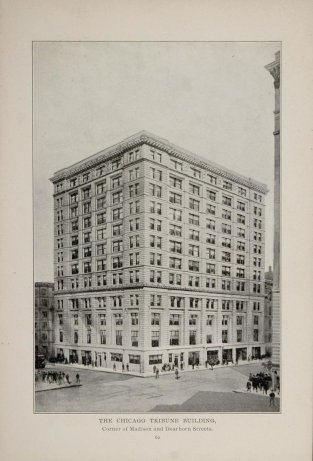 aper. He learned the art of skyscrapering from the floating foundation up, his mentors and peers blazing the trail upwards with him right alongside them. I call it “skyscrapering” because it’s more than just slapping up a tall structure. It’s engineering. It’s precision. It’s planning. It’s expertise. It’s art. It’s TALL.

William Dinwiddie tumbled out of a cab in Chicago in the early days of skyscrapering, where his big brother had landed him an apprenticeship at the now legendary architectural firm of Burnham & Root. It was in these years that he met other future stars—and his future in-laws, Theodore and William and Goldwyn and Paul Starrett, future superstars of the skyscrapering industry. (Those guys? Some of them built the Empire State Building. So they knew tall too!)

My great grandfather began as a draftsman with Burnham & Root, utilizing brand spankin’ new architectural elements like floating foundations composed of steel and cement. He worked on landmarks like the 1902 Chicago Tribune Building, the Chicago Sears & Roebuck Headquarters, and more. He was a dynamo, and from what I have read, I think he and I have more than a few qualities in common. After the 1906 San Francisco Earthquake and Fire, he went west, first building with the inlaws before striking out on his own.

Will founded the Dinwiddie Construction Company in Portland, Oregon in 1911. Before long, this new firm had made its presence known and expanded into California. 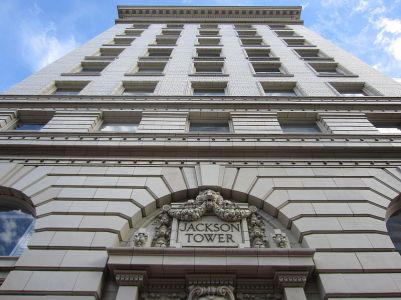 All along the Oregon and California coastlines, the name Dinwiddie means something. It means height, strength, and endurance. Before his untimely death in 1932, Dinwiddie skyscrapers had created a whole new skyline in the American West.

And after Will was gone, his partners took the reins, but my tall grandpa, Jim Dinwiddie, learned the business and later became the Executive Vice President. Together, the Dinwiddie Construction Company brought to the world almost every structure that pierces through the top layer of the San Francisco fog. With this next generation of pioneer contractors, Dinwiddie buildings were known not only for their height, but also for their strength. Decades after construction, I remember my Grandpa Jim telling me with pride how none of “our” buildings were structurally damaged during the 1989 earthquake.

Unfortunately, my family no longer has any stake in the skyscrapering biz. I dearly wish that some mathematical wizardry genes had grabbed on to the height DNA and made their way down to me. But, alas, they did not. My childhood dreams of becoming an architect were dashed the day I learned that a future in architecture would require me to go beyond college algebra. But I digress…. 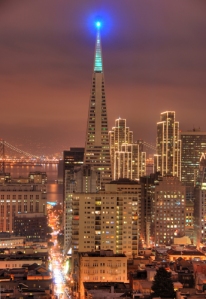 So, yes. I do stand tall. Yes. I know that I am really tall, and rather than shrink in a desire to conform to the standard of the average masses, I stand tall and proud, every inch of me a living memorial to the legacy of scraping the skies, my frame supported by the steel and concrete foundation those tall skyscrapering pioneers laid for me over a century ago.

4 thoughts on “Skyscrapering and the Legacy of Height”