After the group separated, Dull Knife’s followers continued towards where they thought the Red Cloud Agency was located. Unbeknownst to them, Red Cloud had been moved to South Dakota, and the reservation name changed to Pine Ridge.

On October 27, 1878, southeast of Fort Robinson near Chadron Creek in Nebraska, a detachment of US troops finally caught up to Dull Knife and his half of the tribe. After some negotiations, Dull Knife and the other leaders decided to give up without a fight. Snow was beginning to fall heavily, and the people were exhausted, freezing, and starving.

Winter was eminent, and it was too cold to relocate such a large group of people. The Commissioner for Indian Affairs gave word that they should be sent to Fort Robinson in Nebraska. They were to be held there until officials with the Department of the Interior decided what to do with them.

At Fort Robinson, the Indians were told that they’d be fed, clothed, and housed in a barracks building while Washington officials made their decisions regarding their fate. They’d be given the freedom to move about the fort and its surroundings during the day, but they’d be required to return every evening for supper. If one person broke the rules, they’d all be punished. For two months, everything was fine. They were eating better than they’d eaten in over a year. They were sleeping without being afraid they’d be attacked. And those who’d gotten sick down in Oklahoma or on the trip north were finally starting to heal.

Meanwhile, officials from Kansas had their own plans. They were preparing their case against the trip to force their extradition to Kansas to stand trial for the September and October depredations. The settlers who had witnessed Washington O’Connor’s murder from the distant hilltop were being questioned and prepped to identify the perpetrators. Capt Henry Wessels and Fort Commander Major Caleb Carleton desperately tried to convince the tribal leaders to talk the the people into accepting their fate and willingly return to Darlington in Oklahoma. They refused.

On December 16, 1878, an official document arrived from Kansas demanding that Little Wolf, Dull Knife, Wild Hog, and Old Crow were to be sent to Fort Leavenworth, so they could be identified and tried for the first degree murder of Washington O’Connor, the other settlers, and the “woman-ravishings” from September and October. Although the chiefs and their people agreed that those being subpoenaed were the very individuals who had tried to prevent violence during the exodus, secretary of the Department of the Interior, Carl Schurz agreed with Governor George T Anthony and the state of Kansas that the depredations would not go unpunished. The next day, Major Carleton was ordered to lead a detachment to find Little Wolf so that he and his men could be extradited and tried as well. Captain Wessels assumed temporary command of the post.

Once in command of Ft Robinson, Wessels stepped up the pressure. Shortly thereafter, the guards discovered that Bull Hump, one of Dull Knife’s sons, had left Ft Robinson to visit his wife at Pine Ridge. Although he returned after a few days, officials were true to their word regarding the rules. The privileges of the entire tribe were restricted, and Wessels increased the pressure for the people to willingly return to the Darlington Agency in Oklahoma. 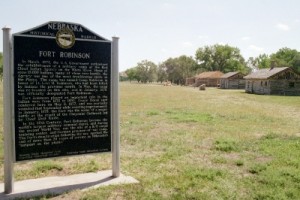 Dull Knife had been ill during the month of December, and Wild Hog, another revered Northern Cheyenne council member, began participating in the negotiations with the military officers. Just like the other chiefs, he was adamant about leaving the north. They simply would not go. They would rather die than go back to Oklahoma.

Thinking he was about to be killed, Wild Hog attempted to commit suicide by stabbing himself in the chest with a knife he had concealed within his robes. In the confusion of the scuffle, the guards misinterpreted his actions, and lunged at him. One of the soldiers was wounded, and later died from his injuries.

Captain Wessels ordered the guards to put Wild Hog and Old Crow in shackles, and then paraded the men in front of the barracks en route to an ambulance. They were transported to a camp mile away where they were sequestered from the rest of their people. After things had settled down, Wild Hog was returned to Fort Robinson to try to convince his people to change their minds and agree to return to Oklahoma. He was able to remove his young daughter, a girl the soldiers called Blanche, and convince nineteen old women to leave the barracks. Other than these few people, the others chose to stay in the barracks and fight for their right to return home.

That evening, January 9, 1879, Captain Wessels appealed to Dull Knife one last time, begging for him to acquiesce. Dull Knife was honest in his response: his people simply would not agree. Conditions were so horrible for them in Oklahoma that there was nothing that would make them agree to return. He appealed to Tangle Hair, leader of the Dog Soldiers. They would not go. Those who remained in the freezing barracks would rather die than return to the Darlington Agency in Oklahoma.

Once darkness fell, the remaining men, women, and children in the barracks resolved to break out. With the windows covered, they tore up the floorboards and used the weapons they’d been able to hide when they were captured. With their weapons, they broke the windows and ran out into the moonlit night. Unwilling to abandon their wives and children, the men carried their children into the darkness—they all ran into the snow—one last act of defiance before being forced back to Darlington.

Immediately, the soldiers began shooting at the escapees. The fired into the chaos indiscriminately, shooting at anything that moved.

Tangle Hair was one of the first out, and one of the first shot down. In the confusion, soldiers fired at the people as they ran out into the freezing night. As was customary, the Dog Soldiers brought up the rear in battle situations in order to ensure the safety of as many of their people as possible. On this night, five warriors provided cover as the Dog Soldiers had always done. In the process, all five of them were shot. Among these warriors were Blacksmith and Noisy Walking.

Many of the Northern Cheyenne in Dull Knife’s band were killed. Others were able to hide in the mountains for a few weeks before being recaptured. When one of the young girls was apprehended, she spoke for the whole tribe when she said, “…we will not go back; we will rather die. You have killed most of us. Why do you not go ahead now and finish the work?” After two weeks, a total of sixty-four members of the original one hundred and fifty Northern Cheyenne had died in what has since gone down in history as the Fort Robinson Massacre. Another seventy-eight were recaptured. About eight or ten were unaccounted for and presumed dead—among them, Dull Knife and his family.

By the next morning, seven men from the Northern Cheyenne tribe who’d accompanied Dull Knife out of Oklahoma remained alive, and they were recaptured by the soldiers at Fort Robinson: Wild Hog, Old Crow, Porcupine, Tangle Hair, Blacksmith, Noisy Walker, and Strong Left Hand. The widows and orphans would be sent to Pine Ridge, and the others returned to Darlington.

But these seven men and fourteen members of their families had a different fate. These men would remain in shackles and sent to Fort Leavenworth as per the indictment by the state of Kansas.

Their story was far from over.

© Julie Dirkes Phelps; Photographer, Author, Researcher, Archivist, and Storyteller. © Copyright 2016. All rights reserved. No part of this publication may be reproduced, distributed, or transmitted in any form or by any means, including photocopying, reposting, or other electronic or mechanical methods, without prior written permission. Be cool, don’t plagiarize. If you want to use something, just ask me. I try to make sure to attribute all images to the appropriate sources, but sometimes I inadvertently post an image from an incorrect source (or the image is incorrectly cited from my source), get images mixed up, or accidentally leave something out. Please email me at itsabeautifultree@yahoo.com with any corrections or concerns. Thanks.